Hero is defined as a person who, in the opinion of others, has heroic qualities or has performed a heroic act and is regarded as a model or ideal. I have had many heroes in my life with Mom and Dad at the top of my hero list.

As a youngster I was once rescued in a dream by Roy Rogers on his horse Trigger when he lassoed a giant spider that had chased me to the edge of a cliff. I awoke very grateful to my childhood hero married to the lovely Dale Evans. I listened on the radio and sang Happy Trails to You at each conclusion of their broadcast. As I grew, people like Corrie Ten Boom, Victor Frankl, Winston Churchill, Mahatma Ghandi and others who protected and championed human life and value became personal heroes. The ultimate hero in my life is the Lord Jesus Christ who rescued me for all eternity.

Heroes inspire us to enlarge our vision of life and what can be accomplished through a single individual. Heroes make us want to live larger, give more, and leave a legacy for the future on planet Earth. Earth needs heroes in these perilous times. We need men and women of compassion, courage, inspiration and innovation to combat the challenges to peace and provision that surround society today. I read about such an individual the other day and was inspired to share his accomplishment.

Heroes can be found in all walks of life. Harris Rosen is a business man as was Schindler of Schindler’s List. Schindler fought a war against genocide. Harris Rosen chose to fight a war on poverty. His approach could change the entire planet if more businesses adopted his model of intervention.

In the early 1900’s Harris Rosen’s Jewish grandfather emigrated from Russia to New York where he opened a restaurant. Rosen grew up on New York’s lower East side where his parents encouraged him to get an education in order to open opportunity’s door. He took their advice and got a business degree in Hotel administration from Cornell before serving in the U.S. military for three years in Germany and South Korea. He worked for Disney before purchasing his first hotel in Orlando. 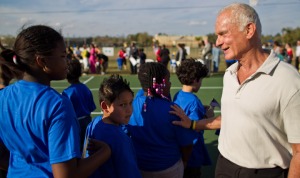 Today he still administers seven hotels, resorts and retreats in the Orlando metropolitan area, but after making millions he began an adventure in philanthropy. He thought, “You know, Harris, God has been so incredibly good to you. … It’s time for you to demonstrate that appreciation and start giving back to those who need a helping hand.” God’s goodness flowed through him and inspired a novel idea. He adopted a community. While adoption is a contemporary solution for many of society’s problems, it takes a visionary to adopt a community.

He adopted Tangelo Park, a poor, predominantly African-American neighborhood of about 2,400 residents. Tangelo Park’s problems were probably reminiscent of Harris’ childhood neighborhood. Manhattan’s Lower East Side in the ’40s and ’50s was a crowded ghetto teeming with immigrants and afflicted with disease. Tangelo Park had been orange orchards and then company housing for Martin Marietta. The area had few services nearby for residents and few public transit options. African Americans comprised 90 percent of the community, with many living below the poverty line.

Harris Rosen committed to give every neighborhood child age two to four access to free preschool. Parents have access to parenting classes, vocational courses and technical training at the local YMCA that Rosen expanded. Every high school graduate who is accepted to a Florida public university, community or state college, or vocational school receives a full Harris Rosen Foundation scholarship, which covers tuition, living and educational expenses through graduation.

The impact has been wide and deep. Tangelo Park Elementary is now a grade-A school. High school graduation rates went from 25% to 100%. Every high school senior graduates. Students pursuing higher education have a 75% graduation rate, the highest ethnic ratio in the country.

Rosen considers his Tangelo Park program another template for national policy, in this case, turning around the nation’s struggling neighborhoods without relying on government. If other businesses and foundations would adopt those communities, “We would not recognize America,” he says.

Well loved! I have been blessed all my life to be surrounded by family and friends that nurtured, supported and loved me into the person that I have become. That love has sustained me throughout whatever circumstance I have found in life. It is the greatest gift that one can give and the essential ingredient to living life with no regrets. I reached this conclusion while lying in a hospital bed on life support for 70 days. Under those circumstances I dealt with the essential ingredients of my life. What was important? Why was I alive? What did my life mean? View all posts by Dr. Mary Ellen Schoonover